We are thrilled to announce the results of the 2nd edition of the Quebec Music Competition (Online International)
Congratulations and bravo to all winners!
We acknowledge the efforts and support of all the competitors and we encourage all of the participants who are not listed on the winners' list to keep working!
​We look forward to more wonderful music from our next competition! 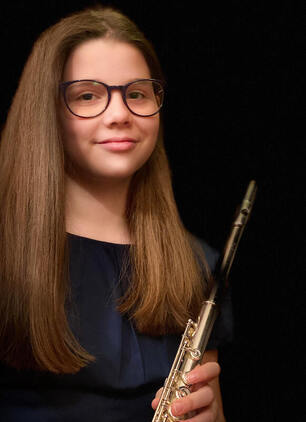 My name is Janka Laar, 10 years old student. I live in Szentendre, which is a small town near Budapest with my two brothers and my parents. I used to dance ballet, ride horse. Now, when I have spare time, I like to ride a bike. I started playing flute when I was 8. I love playing it, listen to music, even going to opera. I would like to be a flutist professional and teacher. I practice hard every day, but as the time goes on, I will practice more and more. This year, the Quebec is my 6th competition I attended, but my first one outside Europe. That's why I am really proud of this result. I have played many songs, such as Bach, Corelli, Bartók, W. Popp, Tchaikovsky, etc.One of my favourites was Gabriel Fauré Sicilienne Op. 78, with harp accompaniment. I am going to perform this in the summer at Salzburg. Thank you for the chance and the support to the Quebec Music Committee, my teachers and my parents. 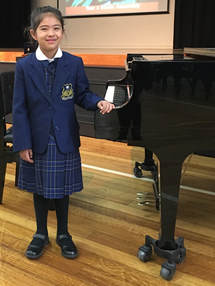 JUNIOR : Second Prize
Ella Shah (Piano) - Australia  ​
​Ella Shah age 7 currently attends PLC Melbourne (Presbyterian Ladies' College, Melbourne). She currently enjoys the grade 2 at school and studies many subjects such as Maths, Drama, French and Music. Ella has been performing in school at music assembly since prep. Since then she has been performing at school’s events and started entering the competitions when she came to grade 1. Ella was introduced the piano when she was 4 years old by her mother at home as part of her being curious about the music and piano as whole. She has been taken on board by teacher Jiajia Yi when She was 5 years old. She has learnt and progressed a lot since she has started learning with JiaJia Yi. She practices every day Rhythm, Music Reading, Theory, Technique and art to perform. She enjoys playing piano and whole family helps and encourages her in playing piano.
According to Ella, her greatest supporter and believer in her ability and skills is her mother. Jiajia helps Ella further in understanding the music and piano. As she has been interested in music so much, Ella was introduced to learn Violin as a second instrument. The decision of learning Violin was warmly welcomed by Ella and she was on journey to learn the violin. She is loving the journey since last 1.5 years of leaning violin and looking forward to learning more pieces on violin. Violin is different in a way than Piano but many things about both is same. The main thing which connects Ella to both instrument is her love and passion for music. She has been invited to join the string power group in school which has recently performed in a musical concert.

Pieces performed by me: 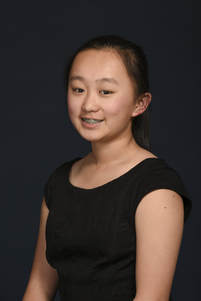 ​Annie Ping is a sophomore in high school from San Jose, California. Her musical training began at age five on the guzheng, a traditional Chinese instrument, and she has won awards in competitions ranging from local to international throughout the years. She began playing the flute in sixth grade in her school band. Since then, she was selected to play in the NCBA All-Northern Honor Band and CASMEC’s All-State Honor Band in both junior high and high school. She placed second in the 2017 American Protégé International Woodwinds and Brass Competition, and second in the 2018 United States Open Music Competition for Instrumental Solo, and second in the 2018 Burlingame Music Club Winds Competition. She performed at Carnegie Weill Recital Hall in 2018 as well. Besides playing music, she has been dancing since age three and has won many awards in competitions. Her favorite styles are ballet, contemporary, and lyrical. She also enjoys photography and reading. Annie would like to thank her parents and her teachers for their continuous support. 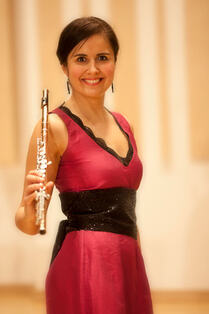 She is currently principal flutist of the Sudetic Philharmonic Orchestra (Filharmonia Sudecka), based in Walbrzych, Poland. 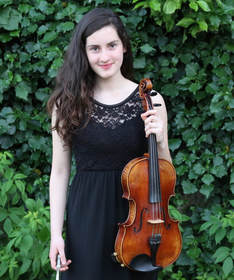 Lia Melo has not only held the position of concertmaster in multiple orchestras including Ensemble Symphonic Orchestra and the 1st Portuguese-German Youth Orchestra but she has also been a member of JOP (Youth Portuguese Orchestra) and Atlantic Coast Orchestra.

This year she was selected for the Berliner Philharmoniker’s BE PHIL Orchestra to perform the Brahms’ 1st symphony under Stanley Dodds (rehearsals) and Sir Simon Rattle. She was also selected to the 2018 European Union Youth Orchestra Summer Tour in Grafenegg (Austria) with EUYO Rehearsal Director Peter Stark. The tour will start in Bolzano (Italy). There will be further concerts with Conductors Manfred Honeck and Gianandrea Noseda in Vienna’s Museumsquartier (Austria), Warsaw (Poland), Berlin (Germany), Amsterdam (Netherlands), at the BBC Proms in London (England), at Grafenegg Festival (Austria), Stresa and Ferrara (Italy).
As a chamber musician Lia Melo has performed extensively with the Vila Real String Quartet and the Vila Real String Trio (founding member of both) with multiple concerts, and awards, in Portugal and Spain. 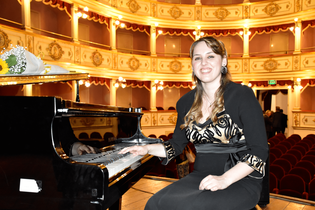 Giusy Ines Tuttolomondo was born in Ribera (AG) on 21/01/1992. She graduated in Piano with the top marks in the Conservatory of Music "A. Toscanini" of Ribera under the guidance of prof.ssa Mariangela Longo. She graduated later in the 2nd specialist level at the Conservatory of Music "L. Cherubini" of Florence under the guidance of prof. Giuseppe Tanzini. She obtained the Master in "New didactic strategies in teaching disciplines of music education".

​Concerts and Masterclasses:
She plays regularly in Italy and abroad. In recent seasons has performer at the Carnegie Hall of New York, at the Auditorium Parco della Musica of Rome, at the Teatro Massimo of Palermo and at the Teatro Pirandello di Agrigento.